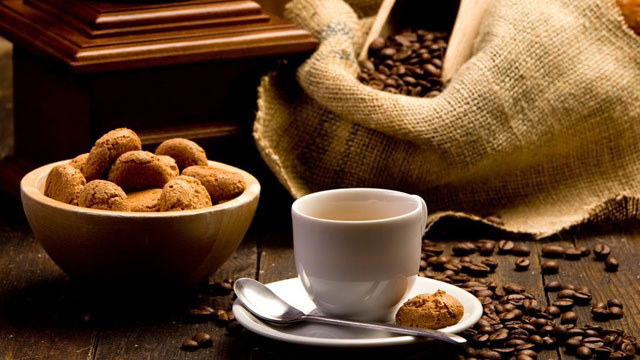 Simply put, coffee is the most popular drink around the globe. Coffee has been in production since the 15th century, it is hardly new, and has been keeping people energized for centuries.

Coffee is documented to have first grown in Ethiopia. It was quickly exported to Yemen (a neighboring country) and from there it took over the Middle-East. Briefly banned by a number of religious groups and cities, its ability to keep people awake and full of energy won out over the ascetic laws.

As with all things I approach in the kitchen we must first look at it from a scientific perspective. Coffee beans are not actually beans. They are the seeds of coffee cherries, bright red berries that grow on small trees throughout the tropical regions of this planet. There are two seeds per berry, pressed flat face to flat face. When harvested, the fruit must be separated from the seeds, as we do not eat the fruit (it is, in some places, now being converted into flour and other processed goods, an attempt to make use of every bit of the harvest). The seeds are nearly all endosperm, which is to say, there is virtually no bran (outer coating), and relatively little interior germ (the embryo of a new plant, high in nutrients)

When first harvested, the seeds are pale green in color. How do we get the dark beans we associate with our favorite drink? We roast the seeds. Coffee roasting is obviously completed on an industrial scale around the world, but you can actually accomplish it at home with something you most likely already have on hand. An air-pop popcorn machine is perfect for roasting coffee! I’ve purchased some raw, green, coffee and will take it from bean to cup here on the show.

Roasting coffee takes less time than you think, and freshly roasted coffee is remarkably better than coffee that has been roasted and left in a bag on the shelf of your grocery store for months. Add the beans to the popper, turn it on, and watch the color change! You can control exactly how dark you like a roast this way. You’ll notice that some papery material flies up as you roast, this is the chaff, the bran, the outer coating of the seed. With coffee, as I said earlier, the chaff is terribly thin and easily removed by the convection air in an air-popper.

Once the coffee has been roasted, simply grind the beans and pour hot water on top. I like to grind my beans with some fresh cardamom pods in a nod to coffee’s Ethiopian heritage.

Perhaps the most enticing aspect of coffee is its aroma. The chemicals responsible for that aroma are called volatiles and they are released with heat. Volatility is a measure of a substance’s tendency to vaporize. Many chemical compounds exist in the raw coffee seed, but when we apply heat to them, the compounds vaporize (become airborne) and consequently we smell them. On a biological level, volatiles (often referred to as flavor compounds) are also a defense mechanism. When eaten raw they are extremely unpleasant, often inducing vomiting, which keeps plants safe from herbivores.

One major chemical compound present in coffee which is not a volatile is our dear friend caffeine! Caffeine is not affected by heat, the same amount is present in a raw bean as in the roasted product. However, it’s solubility is greatly affected by heat. If we take one gram of pure caffeine and submerge it in room temperature water, we will need 1.6 fluid ounces for it to dissolve. If, however, we raise the temperature of the receiving water to 176 degrees fahrenheit it only takes .19 milliliters of water to dissolve the same amount of caffeine. Obviously this accounts for its incredible disbursement in hot coffee.

Historically coffee traces an incredible trade pattern across the world. Beginning in Northeastern Africa it quickly overtook the Middle East. From there it traveled to Italy (the birthplace of much coffee creativity) and then onto the rest of the Western world. In America, the first time roasted beans were sold in a retail market was in Pittsburgh in 1865.

Brew it up cold or hot, you know you love coffee!

For more info visit my website at  Renegade Kitchen

Foods to Avoid When Preparing Confinement Meals in Singapore

When Coffee Brings On The Pain

View all posts by admin →

African Coffee Origins – A Look Inside This Treasured Industry

What You Need To Know About Organic Flours